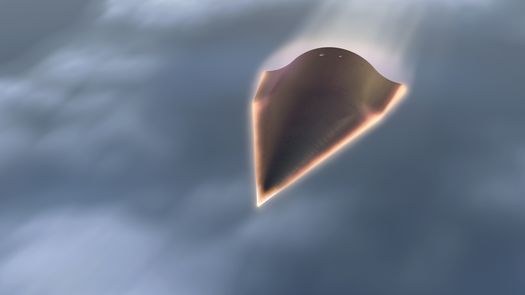 DARPA PR — How do you learn to fly at 13,000 miles per hour—a speed at which it would take less than 12 minutes to get from New York to Los Angeles? Or, how do you know whether a vehicle can maintain a long-duration flight while experiencing temperatures in excess of 3,500 degrees Fahrenheit—hotter than a blast furnace that can melt steel? And if you can fly, and withstand the extreme heat, how do you know if the vehicle can be controlled as it rips apart the air? How? You try it.

DARPA’s second flight test of the Falcon Hypersonic Technology Vehicle 2 is scheduled to launch Wednesday. The flight window is between 7:00am – 1:00 pm PDT from Vandenberg AFB, Calif., aboard an Air Force Minotaur IV rocket.

“Wind tunnels capture valuable, relevant hypersonic data and can operate for relatively long durations up to around Mach 15. To replicate speeds above Mach 15 generally requires special wind tunnels, called impulse tunnels, which provide milliseconds or less of data per run,” Schulz said. “To have captured the equivalent aerodynamic data from flight one at only a scale representation on the ground would have required years, tens of millions of dollars, and several hundred impulse tunnel tests.” According to Schulz, impulse tunnel testing is required to create a portion of Mach 20 relevant physics on the ground.

“And even then,” said Schulz, “we wouldn’t know exactly what to expect based solely on the snapshots provided in ground testing. Only flight testing reveals the harsh and uncertain reality.”

Approximately nine minutes into its first test flight in April 2010, telemetry assets experienced a loss of signal from the HTV-2. The vehicle’s onboard system detected a flight anomaly and engaged its onboard safety system—prompting the vehicle to execute a controlled descent into the ocean.

During its second test flight, “DARPA looks forward to conquering more unknowns about long-duration hypersonic missions. We need to increase our technical knowledge to support future hypersonic technology development,” said Dave Neyland, director of DARPA’s Tactical Technology Office. “We gained valuable data from the first flight, made some adjustments based on the findings of an engineering review board to improve this second flight, and now we’re ready to put all of that to the test.”

For its second test flight, engineers adjusted the vehicle’s center of gravity, decreased the angle of attack flown, and will use the onboard reaction control system to augment the vehicle flaps to maintain stability during flight operations.

A technology demonstration and data-gathering platform, the HTV-2 is packaged in a special capsule atop the launch-ready Minotaur IV Lite rocket.

After the Minotaur rocket launches and nears orbit, HTV-2 will separate and fly a hypersonic glide trajectory within the earth’s atmosphere Mach 20 speeds, approximately 13,000 miles per hour

During the second flight test, more than 20 land, air, sea and space test assets will collect data needed to improve predictions, through modeling and simulation, of future hypersonic flight vehicle performance—ultimately leading toward the capability of reaching anywhere in the world in under an hour.

Learn more about the second test flight of HTV-2 at its interactive web page here http://go.usa.gov/KXs.